We are big and powerful. Our species has existed on this planet for a

very long time and once there were many of us. We are intelligent and our language is very complex. The animals that walk upright on two legs do not understand that. We feel happiness, sorrow and pain. We are very big and have enourmous apetites.

We are happy when we are left alone and wish no harm on others. We are vegetarian.

We are now very sad. Our environment is shrinking and there is not enough food left for us. Man attacks us with stones and loud firecrackers, he shoots holes in our sensitive hides, this causes us great pain and anger. Some of my kind are angered to the extent that they see the “twoleggers” as the enemy that must be killed. We never had need to kill before.

Have we no more right to live on this planet?

For a true nature lover there is no bigger Adventure than observing one herd of wild elephants in the wild. After the size in the most true sense of the word it concerns with the elephant, nevertheless, the most imposing land living being of the world.

Elephants in Central Africa are still being hunted because of their tusk. Another big problem is the consumption and trading of bushmeat. The most affected in Cameroon are the forest elphants.

In last years in South Africa there has been increase in the number of elephants due to Government protection. This has led to the limit of space for these elephants thus Government has authorised for the hunting in othere to create space.The situation in Central Africa is very critical. Today, only a few National parks still have herds of elephants to see.

The elephant in Sri Lanka is the biggest Asian subspecies, Elephus maximus, besides, however, possibly about one third smaller than its African relative.

The elephant population in Asia has shrunk tremendeously in the last

number of years. The main reason for this is the human overpopulation and the resulting destruction of natural wildlife habitat.

Despite shrinking population, it is possible to encounter a herd of one hundred or more elephants. This is an impressive experience.

Yet the entire elephant population was drastically reduced wih the onset of the British governance in Sri Lanka.

Elephants where considered a menace to agriculture. Farmes where even equipped with rifles to further decrice the elephant population. In the mountain region of Sri Lanka, the elephants were alsmost complitely extinct in order to grow tea and coffee. 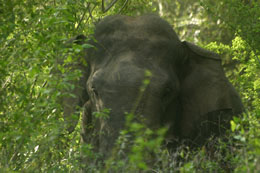 Formerly, Sri Lanka was almost entirely rainforest. Today, there is almost nothing left of the rainforest. The Sinharaja Nationalpark is the only noteworthy rainforest that is left. The Nationalpark is protected by UNESCO. Yet it is too small to provide a natural habitat for elephants as well as the Gibbon Apes. The Gibbons are considred extict in Sri Lanka. The elephants live in Skri Lanka’s veld and savannah region.

Less than 10% of male Asian elephants bear ivory. In African species, the females also wear tusks. As a result, we now hardly find males with tusk in Sri Lanka’s wild. The few that still exist, of course, by poaching are particularly vulnerable. Furthermore, means that the genes of male elephants without tusks unnatural enforce.

In recent years, the situation of gray giant continues to deteriorate

dramatically. The war calls for its victims not only among the people. Elephants are injured and killed by Land- and Claymore mines. The tourists who otherwise finances in the national parks, has remain.

Main projects of the government are resettlement programmes for elephants. The animals are stunned at night, by truck in other areas, and awake totally confused in their new habitat. As a result, the elephants fight each other because the populations, in most cases, are too high. Enclosures are limited with an electric fence.

The elephant with the big Tusk lives no more. He, 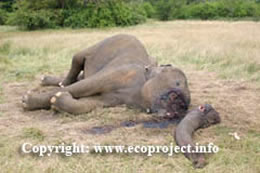 too, was victim of the people. With the big proud Tusker I had three photo shoots, were I come very close to the grey giant . Accidentally shot by an armed Home Guard. Self-rescue attempts of the Sri Lanka Wildlife Department could not prevent the painful end of the gentle elephant.

The dead elephant in the photo was shot at dawn just for fun. He also was not immediately dead but died slow and painful over several hours.